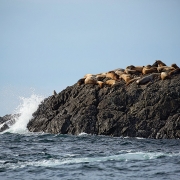 “In the days after the accident, Jamie Bray and other operators tried to defend the practice of not requiring passengers to wear lifejackets by explaining they make escape harder in an enclosed boat. That’s nonsense, says Giesbrecht. He’s conducted a study where people wearing flotation coats are plunged into water: “The assumption is this will hinder their ability to escape the sinking car.” It “really doesn’t.”

Most people who die in cold water don’t die from hypothermia, he adds. They drown because cold incapacitation sets in, muscles and nerve endings stop working and they gradually become unable to keep their heads above water. “That’s why a lifejacket is so important. They will be kept alive long after a person becomes incapacitated by cold.”

Pillay was reportedly unconscious by the time he plunged into the water. Survivors tried to keep his head above water but they lost their grip, and he disappeared.”